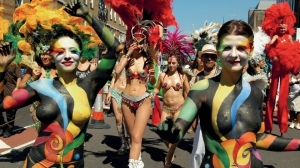 TODAY as it clears up from the biggest carnival in the world, posh Notting Hill — often touted as London’s glitterati village — is very different from how it was in the late 1950s.

In those days slum landlords like Peter Rachman were letting small rooms at exorbitant rents to mainly West Indian tenants.

Those tenants had often been driven into this substandard housing by the racist “No dogs, no blacks” notices in so many other rooms to rent. 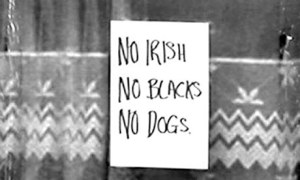 Living in Notting Hill in 1959 was a 32-year-old Antiguan immigrant to Britain, a law student, Kelso Cochrane.

Walking home one night, Kelso was set upon by a group of racist white youths, who stabbed him with a knife.

When three other men arrived on the scene the attackers ran off. Cochrane died an hour later in hospital.

Some 1,200 people joined his funeral procession to Kensal Green Cemetery.

The police declared that this was not a racist murder — where have we heard that before?

It was standard police procedure to deny any racial motive to crimes of this sort. It often still is. Police thinking at the time was that to arrest a white man for a black murder would cause enormous civil unrest. 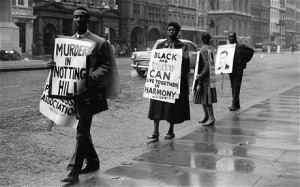 In fact at the time Notting Hill was a stronghold for Oswald Mosley’s fascist Union Movement and Colin Jordan’s just as nasty White Defence League.

The previous year, race riots had broken out in the area.

We now know that Cochrane’s killers were teddy boy supporters of Mosley and his fascists. Peter Dawson, a member himself, said as much to the Sunday People.

Mosley later held a public meeting on the exact spot where Cochrane had been murdered.

He stood here in the 1959 general election on a stridently anti-immigration platform. Mosley demanded forced repatriation of Caribbean immigrants as well no mixed marriages. 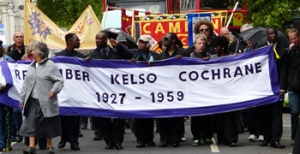 As a reaction to Cochrane’s murder and the Notting Hill race riots, in 1959, local communist activist and journalist Claudia Jones organised events to celebrate Caribbean culture in what she called “the face of the hate from the white racists.”

These events laid the foundations for what would become the first Notting Hill Carnival in 1964.

It would grow and grow until today it is one of the biggest street festivals in the world attracting over a million people. 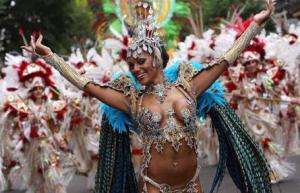 Jones was born a Cumberbatch — her family slave name. Actor Benedict Cumberbatch’s ancestors made their fortune from slavery and gave their slaves the family name. Today Benedict is horrified by his family’s disgusting history.

Born in 1915, Claudia would have been 100 this year. Trinidad-born, as a child she migrated with her family to the US.

In 1936 she joined the Young Communist League USA. By 1937 she was writing for the Daily Worker. Just one year later she was editor of its Weekly Review. 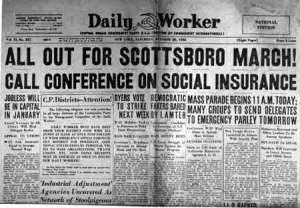 After the war, she held leading roles in the Women’s National Commission, the Communist Party USA women’s commission, and the National Peace Council. She also made a major contribution to the US civil rights movement.

However her membership of the national committee of the Communist Party and her various activities led in 1948 to her arrest and imprisonment.

It was to be the first of four terms in jail. These periods would break her health but never her spirit.

All her effective communist writing and campaigning was too much for the FBI and the rest of the US red-baiting witch-hunt machine.

The US authorities had at first wanted to deport her to Trinidad and Tobago. Governor Major General Sir Hubert Elvin Rance considered that “she may prove troublesome” and refused to take her.

She was eventually offered residency in Britain on humanitarian grounds. Jones arrived in Britain in 1955.

By 1958 she had founded Britain’s first black newspaper, the West Indian Gazette and Afro-Asian Caribbean News. From its office above a barber’s shop in Brixton she used the paper to campaign against racism in housing, education and employment.

Through her paper she became a key figure in the rise of consciousness within the black British community.

All the while she spoke at peace rallies and the Trade Union Congress, against immigration legislation and for Nelson Mandela’s release. She visited Russia and China, where she met Mao Zedong.

Just four months after launching her paper, race riots hit the streets of Notting Hill and some other British cities including Nottingham. 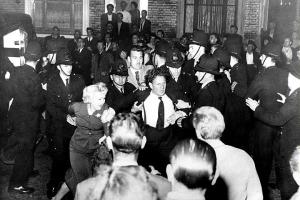 Jones met many of the members of the black British community to discuss these worrying developments.

She also had talks with black colonial leaders such as Cheddi Jagan of Guiana, Norman Manley of Jamaica and Eric Williams of Trinidad and Tobago.

Jones decided the black community needed to “wash the taste of Notting Hill and Nottingham out of our mouths.”

She used her connections to book St Pancras Town Hall in January 1959 for the first Mardi-Gras-based carnival (below). Jazz guitarist Fitzroy Coleman and singer Cleo Laine were among the headline acts. 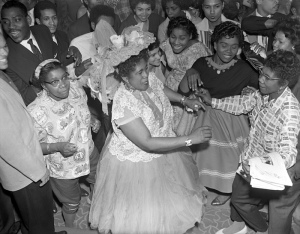 This and five other London events raised money “to assist the payments of fines of coloured and white youths involved in the Notting Hill events.”

It was those early carnival events that would grow into the huge carnival we know today.

Claudia Jones died on Christmas Eve 1964. She was buried near Karl Marx in Highgate Cemetery.

A message from her lifelong friend and comrade Paul Robeson told the many assembled mourners: “It was a great privilege to have known Claudia Jones. She was a vigorous and courageous leader of the Communist Party of the United States, and was very active in the work for the unity of white and coloured peoples and for dignity and equality, especially for the negro people and for women.” 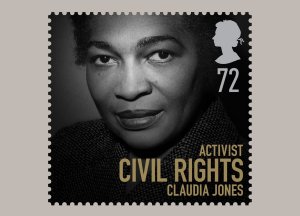 In the same year, a blue plaque was unveiled on the corner of Tavistock Road and Portobello Road commemorating Jones as the “Mother of Caribbean Carnival in Britain.” 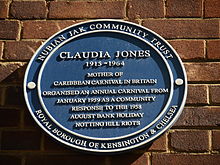 This article first appeared in the Morning Star 1 September 2015.